Ford Motor Co. unveiled a prototype F150 at the Detroit Auto Show. The truck that is aimed for launch in 2015 is fashioned with aluminum body panels and weighs 700 pounds less than the current models on the road. General Motors also unveiled a new Chevy Corvette that sports an underbody manufactured from aluminum and a hood made from carbon-fiber composite. Many of the light weight features seen in these new concepts were inspired from parts used in racing vehicles. According the U.S. Council for Automotive Research and estimated 350 pounds of magnesium will be used in the average vehicle by 2020, replacing 500 pounds of steel.2

As with any new innovation in this day and age there are always drawbacks or concerns. The use of new lightweight materials in automobiles is a concern for the already struggling private automotive repair industry. At a recent WNY Automotive Technology and Energy Group meeting, several private repair shop owners voiced concerns about the cost of equipment and training that will be required to repair vehicles utilizing new lightweight materials.

Safety concerns have also been voiced about the new materials. According to the EPA and DOT’s lightweighting studies, the baseline vehicle’s mass could be reduced by about 20 percent without affecting safety performance. In federal crash tests the new lightweight materials are performing just as well as baseline vehicles.3

If you drive a General Motors (Chevy, Saturn, GMC, Buick, Pontiac, Cadillac) vehicle and have ever attempted to search for parts for your vehicle, there is a real good possibility the sales person helping you asked you about your vehicle’s options codes. If you have never experienced this question then by reading this post you are probably wondering what in the world I’m talking about. Don’t worry that is the whole point of this post.

Since 1984, General Motors has placed service parts identification (SPID) labels on all of their vehicles. This label was designed to aid service and parts personnel in identifying parts and options originally installed on that specific vehicle. This label lists both Regular Production Option (RPO) and Regular Production Accessory (RPA) codes. These codes on your sticker will be identical to the specifications on your vehicle’s original build sheet from the factory. The codes found the tag are three digit combinations of letters and numbers. An example of one of these codes is FE3; this is a common suspension option code in GM vehicles.

Ok now that you know what your Service Parts Identification (SPID) tag is and does, it’s time to find it on your vehicle. Finding your SPID tag can sometimes be a bit of a challenge. The most common hiding places for this label are, in your glove box, on the inside of your trunk lid, and/or on the bottom side of the cover for you spare tire in your trunk. On some of the GM SUVs and mini-vans the SPID label will be located on one of the plastic storage covers in the rear of the vehicle. I’m currently working on a vehicle specific list of SPID locations that I will be posting at a later date.

It’s a good idea to know the location and understand how to read this sticker prior to ordering or inquiring about any parts for you GM vehicle. If you have any questions relating to General Motors Service Parts Identification (SPID) labels or any automotive parts questions, as always feel free to contact me at marksautoparts.socialmedia@gmail.com. 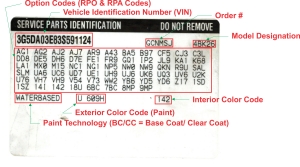 Example Of A GM SPID Label